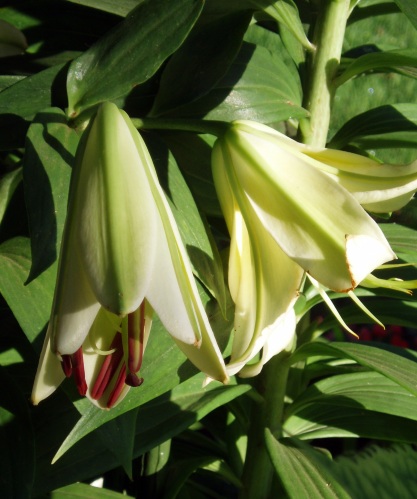 It happens every year.

About the time the sky fills with fireworks

Oriental lilies light up my garden.

They should nick name them 4th of July lilies!

You’ll notice the scent just by walking near them.

You will recognize two as florist favorites. 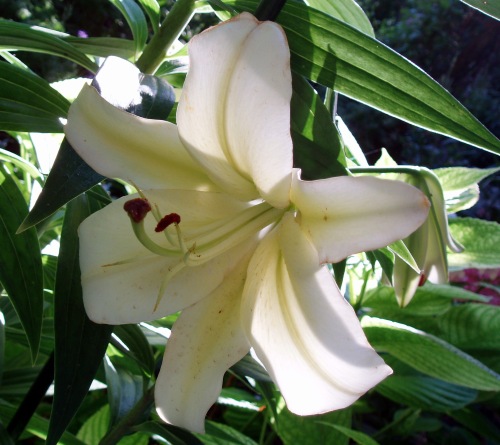 And hot pink Stargazer are frequent visitors in bouquets and arrangement.

Showing off in my garden this year is a lily of unknown lineage.

But I’m not good at record keeping.

I’ve looked in the catalog and can’t seem to figure out what I ordered.

My best guess is that it’s actually an Orienpet Lily.

That’s a cross between Oriental Lilies and Chinese Trumpet Lilies.

One catalog described it as lemon-meringue pie.

Sounds good to me!

Since Orientals bloom in the heat of the summer they like to live in the shade.

You can give them some morning sunshine but please not in the afternoon.

I learned this the hard way.

The first time I planted Stargazers I ended up covering them with a tea towel every afternoon to keep them blooming a few days longer.

Stems can have up to a dozen or so buds.

Buds will open from the bottom to the top of the stem over a couple of weeks.

It’s not a long bloom period but it’s worth it.

Years ago we took Elliott on an “urban vacation”.

Boston was our destination.

I’d always wanted to see the Boston Pops on the banks of the Charles River on the 4th.

The trip was great – a memorable family lore kind of trip.

But..all the Stargazers bloomed and finished while we were gone.

Another great feature of these beauties is that they don’t take up much space.

They grow straight up so you can fit them in anywhere.

But since they will have completely disappeared by the time you get ready to plant bulbs in the fall it’s important that you mark the empty places now.

Just place a brick or two any place you think would make a good home for lilies.

That way you won’t have to guess or try to remember.

The worst sound in the garden is the sound of a lily bulb being sliced in half by a shovel.

So this year when the bulb catalogs start arriving – I’ve actually already gotten one – look at Oriental lilies and their cousin the Orienpets. 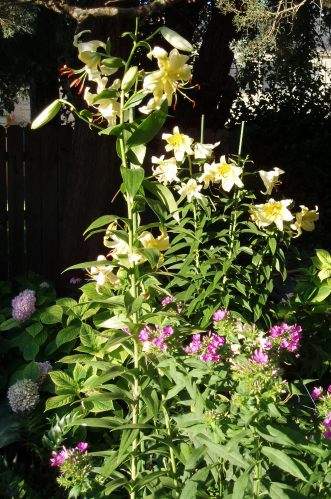 I have 4 Aloha Rose bushes.

They are a hybrid.

I knew better but got sucked in by the glorious peachy pink blooms.

For the past three years they have been plagued by a tiny bug that sucks the life out of the blooms – thrips – I think.

I’ve tried everything – to no avail.

Last week at the Farmers Market I was spinning my tale of woe to Kate who is an excellent gardener.

Found them and installed them this week.

Hope they work since they are not the prettiest addition to my garden.

Another great reason to go to your local farmers market this weekend.

As you garden in this tough heat remember to drink tons of water and most importantly…..follow the shade.